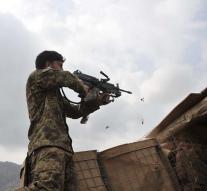 kabul - Bloody fighting between the radical Islamist Taliban are surely slain twenty fighters. Two rival groups fought against each other in the western Afghan province of Herat, said a spokesman for the governor Wednesday. Civilian casualties are not cases.

One group belongs to dissident leader Mullah Mohammed Rassul, the other is loyal to Taliban leader Mullah Haibatullah Achundsada newly elected in May. Mullah Rassul had a day after the inauguration of the new Taliban chief refused to follow him.

The Wall Street Journal reported in May that the Afghan secret service gets money from the United States to support splinter groups of the Taliban. The purpose is to weaken the movement in this way. Even Mullah Rassuls group had received money and weapons.