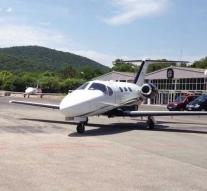 - Many wealthy visitors from the South of France Saint-Tropez may soon no longer with their private jet land at the airport near the fashionable resort. The 60 kilometers to the west airfield closes according austerity gates for aircraft from outside the Schengen zone.

People with private aircraft such as Russia, England and Saudi Arabia are so affected by austerity rage in Paris, reported Monday the newspaper Le Figaro. The French government wants to airports La Môle-Saint-Tropez and Castellet (near Toulon) abolish the border controls. They are too expensive in relation to the small number of flights and passengers.

The 'victims' of these cuts must all the way to Nice airport. Lying crow flies not far away, but the car is without traffic jams around 1 hour and 40 minutes.

On the Riviera austerity is strongly criticized. According to Michel Tohane who goes on airports in the region on business flights, this will be a further blow to the region. The terrorist attack in Nice on July 14 there was already a. Tourists and businessmen who come with their own gear, give it a person at least 1700 euros per day. The clientele is mainly from Russia and Great Britain (not Schengen countries), according Tohane. The President of the Provence-Alpes-Côte d'Azur, Christian Estrosi, Prime Minister Manuel Valls asked to reverse the cuts.

At other airports like that of the Breton Lannion or the Picardy Amiens border controls disappear too. In total thirteen airports closed to flights from outside the Schengen zone. That area has 26 European countries that have abolished mutual border controls.