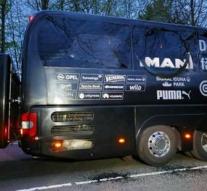 karlsruhe - German police arrested a suspected Iraqi cease involvement in the attack on the team bus for football club Borussia Dortmund. The man is stuck because he is his or suspected member of terrorist group Islamic State. The twenties from Iraq would be a unit of IS have led his country.

The remaining suspect in the case concerning the attack on the bus is a 28-year-old German, with alleged links to jihadist circles.