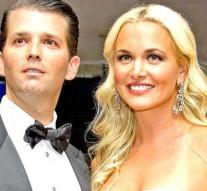 - During the recording of Celebrity Apprentice in 2009, there was something flourishing between singer Aubrey O'Day and Donald Trump jr. That claims the New York Post based on three sources.

Earlier this week, Donald's wife, Vanessa, requested a divorce after thirteen years and five children. During his alleged affair, Vanessa was pregnant with the fourth child of the couple. Donald Jr. worked at Celebrity Apprentice as an advisor to his father, at that time the presenter of the program and now President of the USA. Aubrey was one of the participants in the star edition of the reality show.