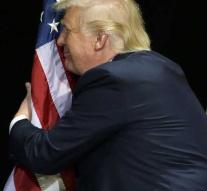 - Presidents also need love in their lives. Even if this president, Donald Trump, is called. After his speech at the National Federation of Independent Business event, Trump decided to cuddle an inanimate object; the American flag.

Images of the remarkable action were shared on Twitter.

The President of the United States had just given a speech about illegal migration at the border of Mexico. The fact that migrant children are separated from their parents there is, according to him, the fault of the democrats. He also went to Mexico. 'Mexico does not even have border guards,' says Trump.

During the applause he received, the president stepped off the flag and gave it a big hug.

During his 2016 campaign, Donald Trump also cuddled flags at an event in New Hampshire and a meeting in Florida.