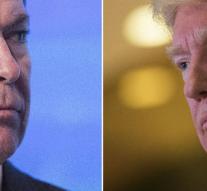 amsterdam - The investigation into the possible links between Team Trump and Russia during the election campaign focuses on a current closest assistant and advisor to Trump in the White House, as reported by the Washington Post.

The newspaper is based on a source close to the investigation but could not mention the name of Trump's nearest adviser.

Trump himself appears to have told the Russians that the resignation of FBI director James Comey- who described Trump as an 'idiot'- relieved him of a huge burden. 'I just fired the head of the FBI. He was crazy, a real idiot, 'said the New York Times, based on transcriptions of the meeting in the White House between the Trump and the Russians. 'I was under heavy pressure because of Russia. That's over now, 'Trump would have said.

The transcriptions would be hacked by an official in the White House.