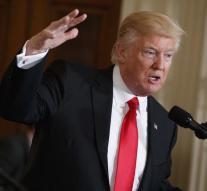 washington - Donald Trump has the long tradition of using an iftar meal in the White House at the end of the Ramadan. The president sent Muslims a greeting, but he saw an Islamic feast.

'Because of the American people, Melania and I send our warm greetings to the Muslim community while celebrating Eid al-Fitv,' says the announcement.

In 1996, Hillary Clinton performed the itfar meal as a tradition. Since then, one hundred and fifty people have been invited to the White House for an iftar meal every year. George Bush continued the tradition, even in 2001 just after the attacks.

Trump has finished the tradition this year without any explanation. In a press release, Trump wrote the following: 'During this holiday we are reminded of the importance of mercy, pity and good will. Together with Muslims all over the world, the United States renews their commitment to honor these values. '

Finally, Muslims in the US wish a 'blessed celebration'.