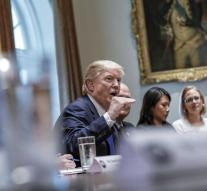 washington - President Donald Trump has blocked the sale of the American manufacturer of semiconductor Lattice to an investment company with Chinese background. He gave Beijing a clear signal that Washington does not tolerate transactions with technology that can be used for military purposes.

Canyon Bridge Capital Partners, based in Palo Alto, California, supported by the Chinese state, wanted to take over Lattice Semiconductor Corp for $ 1.3 billion. That would have been one of the biggest Chinese deals in the American chip industry.