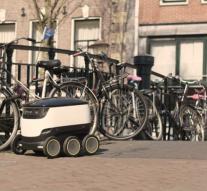 hamburg - Since May 10th, Hamburg has rolled a robot through the streets that deliver on behalf of Domino's pizzas. After a successful first test in Amsterdam, the pizzaketen took the delivery robot in Germany into the delivery team, announced the company.

Domino customers in the Ottensen district can now provide a pizza by the robot. The robot of Starship Technologies is still used on a trial basis. During the test phase, Starship employees still participate. The intention is, however, that the delivery robots eventually end up worldwide on their own.

Certain sensors evade the robot pedestrians and other obstacles on its way. The robot counts nine cameras and special sensors, which ensure that the speed adjusts its speed to the traffic flow.

Once arrived at the customer, they can open the delivery box lid, including a previously passed code. The robot can transport up to five pizzas at a time.