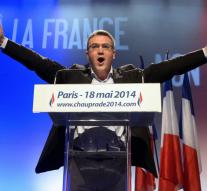 - The Dominican Republic has issued an arrest warrant against Aymeric Chauprade, Member of the European Parliament. The Frenchman recently in an interview with the magazine Paris Match said that he helped escape has two French pilots who were blamed on the Caribbean island of smuggling cocaine.

The duo escaped by speedboat while they were at liberty pending appeal in their case. The two would have transported 700 kilos of cocaine, accounting for a sentence of twenty years in prison. Their escape was devised by the parliament. The pilots boarded the speedboat on a larger vessel with which they sailed to the France-ruled Caribbean island of Saint Martin, 700 kilometers away.

The Public Prosecutor of the Dominican Republic announced Monday " international steps " it will take against the three Frenchmen.

Aymeric Chauprade was to early November, members of the Front National. Since then, he is part of the group of non-attached MEPs.