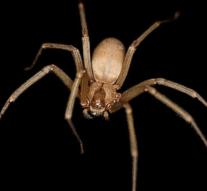 sydney - "I 'm going to murder you, you're dead. Die! Die! " Neighbors in Sydney called the police when they heard a woman screaming and a man heard calling the angry words. Agents who pounded got to speak to the man at the door, but denied that there was a woman in the house.

" People heard you clearly heard screaming and furniture fell over ", said an officer against him. The man had to confess that he was not a woman had been beaten up, but a spin. " ! A very big "

The " screaming woman " had been the man himself. " After a long pause, some laughter and a quick glance at the apartment to make sure there was no victim, apart from the spider, we left ", Sky News, quoting from the police report.