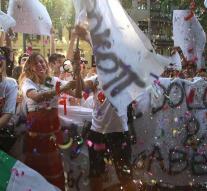 milan - Italian fashion designers Dolce \u0026 Gabbana recently got a lot of wind from the front. They were daring to dress Melania Trump during her first foreign journey.

On his Instagram account, Stefano Gabbana proudly showed pictures of the American First Lady in Dolce \u0026 amp; Gabbana There were quite fierce reactions. Among other things, it was called for a boycott of the fashion brand.

And that found Dolce \u0026 amp; Gabbana itself is a nice idea. In the fashion shop webshop there are now t-shirts for sale with the text #BOYCOTT DOLCE \u0026 amp; GABBANA. Of course it will be haute couture, so the shirt costs a pretty absurd 175 euros.

In addition, on the D \u0026 amp; G site, a cheerful video of a protest against Dolce \u0026 amp; Gabbana The two designers themselves are also very enthusiastic about demonstrating themselves.