Home / World / Dog with a deviation? That's how you do that 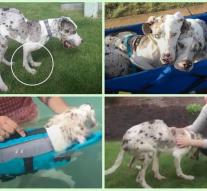 amsterdam - Dog owners sometimes struggle with a dog's disability, but a video that circulates on the internet shows how it should be. A woman tried everything to let her dogs run- and successfully.

'When I saw Quinn, he was normal,' says the woman. Soon it turned out: his mother and father were brother and sister, and therefore Quinn had deviations. He had difficulty walking.

Their boss picked Gray by, Quinn's brother. 'We give him hydrotherapy, and walk with them on the mountain while holding them. 'A video shows how the dogs are comforted and supported.

The effort for Quinn and Gray pays: the dogs have celebrated their first birthday, are hilarious and can walk. 'And they inspire me as a social worker in working with people with physical disabilities,' says the woman.

'It sounds strange. But... My dogs do not give up. They have limits, but they have gone about it. 'There is only one possibility in life, she decides: never give up.