Home / World / Dog cloned from film: 'This is getting even better' 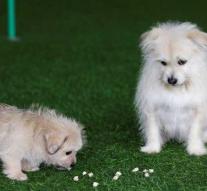 beijing - In China, a well-known dog who played in several films has been cloned. His owners are hopeful that the young version- more than two months old- will be even better off acting.

The dog Guozhi is an absolute film star in China, but he gets a day older and is over his career highlight; reason for his owner to clone Guozhi, because he is not fertile.