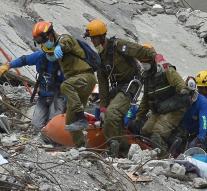 mexico - The death rate due to the recent earthquake in Mexico with a force of 7.1 has risen to 273. This has been announced by the rescue services coordinator on Thursday. In addition, only 1900 people have been injured in the capital.

There are no children under the ruins of the collapsed school. The search for an adult survivor continues. A navy officer who is with his men on the ground said that nineteen students and six other attendees were killed by the natural disaster of Tuesday. Eleven children could be saved.