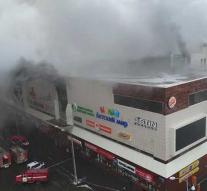 moscow - The death toll due to a fire in a shopping center in the city of Kemerovo in Siberia rose to 48. That was reported by local media on Sunday on the basis of information from local authorities. Dozens of people are missing. Among the victims are at least eleven children, many of them were on a play deck in the complex.

The roof of the shopping center has collapsed. Some people jumped out of the building to save themselves, as can be seen on social media.

The cause of the fire in the complex is not known. In the center, apart from shops, among other things, cinemas and restaurants are located. According to local media, more than a hundred people have been evacuated from the complex.

The cause is not yet known, nor is it yet clear where exactly the fire originated. Some media report that the fire started in the cinema, other media call the playing deck. According to witnesses, the fire alarm has not worked and according to the authorities there are indications that the emergency exits and entrance doors of the cinema were closed.

The shopping center was opened in 2013.

President Vladimir Putin conveyed his condolences to the next of kin.

Kemerovo is located in an area where coal is extracted about 3600 kilometers east of Moscow.