Home / World / Doctors sound the alarm about the homeless in Brussels 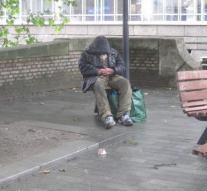 brussels - The number of homeless in Brussels been increasing for years and they also face growing variety of medical ailments. Doctors of the World heralded Monday the alarm. ' Homeless City with sick underbelly '', the organization summarized.

The number of homeless in the Belgian capital doubled between 2008 and 2014 to more than 1500. In winter shelters where medical volunteers work, the number of sick homeless increased from approximately one hundred in 2007 to nearly a thousand last winter.

Seven out of ten homeless people in Brussels do not have a family doctor, partly because they have no fixed address. Doctors of the World wants the rules to be adapted and advocates in a statement that medical care to homeless people is also guaranteed after winter. The current 38 beds for critically ill homeless are insufficient, says the organization.