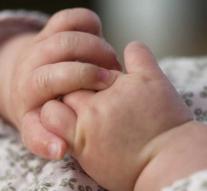 liege - A 61-year-old doctor is sentenced to eight years in Belgium for the rape of his granddaughter. She was not even six months old at the time of the crime.

The grandfather was allowed to babysit, but abused and injured the child, reports Nieuwsblad. After his arrest, blood traps were found in a dustbin and on the bed with DNA traces of the suspect and the girl. The DNA of the baby was also found on the sex part and under the fingernails of the doctor.