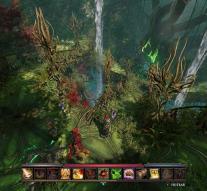 ralph beentjes (xgn.nl) - Previously in the good old days, there were role-playing games that offered dozens of hours of fun, with exciting and intriguing stories, classic characters, profound conversations and choices in abundance.

With Divinity Original Sin II Definitive Edition we can revive those times in a modern way. But did not we leave that time with a reason?

Divinity Original Sin II is a classic role play, made by the Belgian developer Larian Studios. The style-based game is based on role plays that experienced their golden age in the late 90s, such as Baldur's Gate and Fallout. Games that you see from above and focus on putting together a group of adventurers and tactical gameplay. In that respect, Divinity Original Sin II has the essence perfectly.

When you start the game for the first time, you are immediately thrown into the deep, because when creating a character you have to choose between different races, skills, statistics and unique characteristics. Fortunately for novice players there is also the possibility to choose a character that has been made in advance and offers its own storyline, a so-called Origin Story. Once you have made a choice, the adventure really begins.