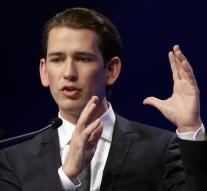 brussels - The 28 Member States are divided on the European Union on the talks on Turkey's accession.

The Austrian Foreign Minister Sebastian Kurz reiterated Monday in Brussels that he believes that there is no place in the EU and the negotiations should be broken off for Turkey. Luxembourg agrees. The British minister Boris Johnson said that Turkey should not be pushed into a corner. ' We should not overreact in a way that is against our collective interests. ''

Countries like Germany, France and the Netherlands also found that quitting would cause too much damage. ' This process we have to go through step by step, but at the same time be clear about our red lines, such as the death penalty, '' said development minister Bert Koenders.

Any decision comes on Tuesday, December 13th at issue, as ministers of the EU summit later Preparing week in Brussels.