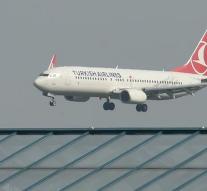 - Airplanes on their way to get the Ataturk Airport in Istanbul no permission to land there again.

This informed a staff of Turkish Airlines Tuesday. Several aircraft were already diverted to other airports after the suicide attack at the security check at the international terminal of the airport Ataturk.

Planes that would leave Tuesday from Ataturk, get there no permission. The official said it is not yet clear whether Wednesday flights to Istanbul are canceled. A spokesman for Schiphol Airport had no information about it.