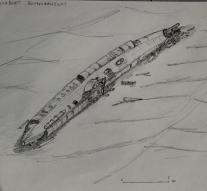 brugge - In a Belgian part of the North Sea, an almost intact submarine of the First World War was found. Scientists assume that the bodies of the 23 crew members are still on board. That made the governor of West Flanders Carl Decaluwé known Tuesday morning.

The wreck is at a depth of thirty meters, but the exact location is not disclosed. 'The submarine is in such a good condition that we assume that all those bodies are still on board,' says Decaluwé in Belgian media. 'In such a submarine there were as standard 22 crew members and a commander. 'Experts suspect that the vessel has gone to the seabed after contact with a mine.

It would be a submarine type UB-II, a German First World War. The boat would be in a relatively good condition, if there are any damage to the wreckage.

Of eleven well-known sunken submarines in Belgian waters this would be the best kept copy.