Home / Tech / Disney will watch that can recognize objects 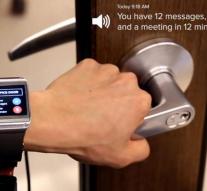 - The research arm of Disney has developed a smart watch in collaboration with the American Carnegie Melon University that can recognize objects when the wearer holds them. For this, the device uses the unique patterns in the electromagnetic radiation emitting devices.

Many objects give a certain radiation, which enters the body when they are arrested. The watch, the EM-Sense, this radiation and picks up on this basis can indicate what object it is. However, the device itself must first "learn" what objects which have radiation patterns, but then it can expand the knowledge base of previously picked up patterns. According to the creators is the watch for 96.1 percent accurate.

Remarkably, the entire device is made of a Samsung Galaxy Gear smart watch in combination with a low-cost radio receiver. Making the necessary changes would have cost the researchers less than $ 10.

The creators see some practical applications. So the smart automatic watch has a timer as a toothbrush is arrested and he shows appointments when the door handle is touched.

It is not yet known whether there are plans to incorporate the techniekn in a smart watch that can buy consumers.