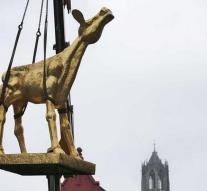 utrecht - Making film and film-loving Netherlands are preparing for the annual presentation of the Golden Calves, the film prizes of the Dutch Film Festival. Friday evening the winners will be announced at the Golden Calves L'Or Gala at the Beatrix Theater in Utrecht.

The boekverfilming Public Works, on the book by Thomas Rosenboom, received the most nominations. The drama was ten times nominated in nine categories. The film is a likely candidate for a Golden Calf for best film, best actor (Gijs Scholten van Aschat and Jacob Derwig) and Best Actress (Rifka Lodeizen).

Public Works compete against three other book adaptations: Never sleep (on the book by W. F. Hermans) The Helleveeg and Kneeling on a bed violins (Jan Siebelink) (A. Thomas F. Van der Heijden.).

Actors and actresses also win a statuette are others Fedja van Huett, Thekla Reuten, Anniek Pheifer and Hannah Hoekstra. For best director are among others Boudewijn Koole (Beyond Trail), David Verbeek (Full Contact) and Ben Sombogaart (Kneeling on a bed violins) nominated.