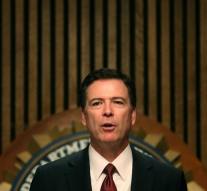 new york - FBI director James Comey is writing a book about his experience in government service by President Donald Trump. According to the New York Times, all major American publishers have shown interest in recent days. Next week they can make an offer.

Comey advises by literary agent Matt Latimer. Who said that it will not be conventional memoirs, packing up firmly and putting everything on the table. It is rather a 'exploration of the principles', which allowed Comey to lead during the most challenging moments of his career.

The issue is investigating Hillary Clinton's e-mails during the election campaign and, of course, the tumultuous and short term of the former FBI boss during the Trump government. 'It becomes a book of leadership and the search for truth,' said Latimer.