Home / World / 'Discovery of the decade': centuries-old shipwreck near Portugal 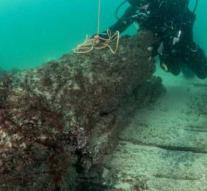 cascais - Off the coast of Portugal, archaeologists have found a ship wreck that has been there for four hundred years. The ship sank near Lisbon when it probably returned from India with spices.

'The discovery of the decade', says project leader Jorge Freire the find. According to him, this is 'the most important discovery of all time in Portugal. 'The wreck and the objects that the ship transported have been very well preserved, he says.

In and around the wreck, divers found various kinds of spices, nine bronze cannons with the Portuguese coat of arms engraved on them, Chinese porcelain and cinnamon shells, which used to be used as a means of payment.

Presumably the ship sank somewhere between 1575 and 1625. The wreck on the bottom off the coast of Cascais was found at the beginning of this month. There the river exudes the Tagus which flows past Lisbon. It is a place where many ships have died.