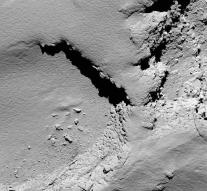 - The discoverer of the comet where Europe has performed a historic landing in 2014, is deceased. Ukrainian astronomer Klim Tsjoerjoemov died Saturday. He was 79 years old. The 67P / Churyumov-Gerasimenko is named after him.

The death of Tsjoerjoemov published by the space agencies of Russia (Roskosmos) and Europe (ESA).

Tsjoerjoemov worked as an astronomer in the Soviet Union. With colleague Svetlana Gerasimenko he examined the orbit of a comet that was already known. On one of the photos that made Gerasimenko, Tsjoerjoemov discovered that there was to see a boulder in the corner. It turned out another comet. When they looked further, they discovered that the comet was also seen on other images. That space rock was named after them.

67P is billions of years old. He was born from the same cloud of gas and dust where the earth and the other planets formed from. It has the shape of a rubber duck and is several kilometers high.

Europe in March 2004 launched a probe, Rosetta, who had to reach 67P. Since he came to fly, after more than six billion kilometers in 2014. Later that year the Rosetta put an unmanned scout on the surface. That was never performed. Last month, the mission was over. Europe was the Rosetta deliberately crash into the comet.