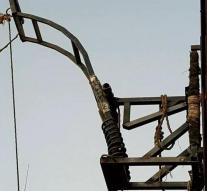 tucson - US border guards have recently seen a huge catapult on the border with Mexico. With the structure, large bags of drugs the border are thrown about.

The catapult, which was built in medieval style, is in the southeast of Tucson discovered in the US state of Arizona and was last week. When a border patrol sprint away suddenly saw a group of men, they found the impressive device. There were two bags of cannabis on the basis of a total of 20 kilos.

The catapult has been dismantled. There is still no one arrested. Drug traffickers are becoming more inventive. There are discovered regularly underground tunnels, but also drones lately are increasingly used drugs to get over the border.