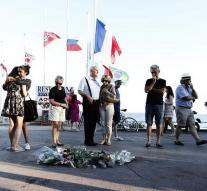 - The Promenade des Anglais is Monday again made entirely public. After a minute's silence in memory of the many victims, the range of about one kilometer then still closed, opened to traffic. This was announced by the city council. Pedestrians were already Saturday afternoon along the crash site by the sea.

The boulevard was Thursday night the scene of a horrible, terrorist action. A 31-year-old Tunisian drove a truck at full speed into a crowd of people who had attended the fireworks at the conclusion of the national holiday. That took at least 84 hikers, including several children, life. The wild ride ended after the shooting of the driver by the police.