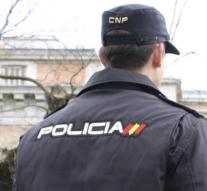 - Spanish police have a mentally retarded man of 59 years freed from a cage in the south of the country. He was there with his brother and sister locked up 'for his own safety', while they conceded his monthly pension of one thousand euro.

How long has the victim imprisoned is unclear. According to the police of his medical records since 1996, no longer known. The 76-year-old brother and 61-year-old sister were arrested.

The victim was staying in an area of ​​3 by 3 meters in a house in Dos Hermanas near Seville. He sat under his own feces on a mattress.

Police describe the loft, which was found behind a barricaded door and a dilapidated staircase, as a kind duivenkot without a roof. Agents were in the house to look after the brother in a drunken state had caused problems.