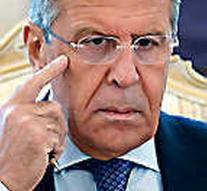 moscow - Russia is trying to a political process in Syria to launch that should lead to a peace. Russian Minister of Foreign Affairs Sergey Lavrov opened Saturday a diplomatic offensive by counterparts from the Middle East and the United States calling.

Lavrov spoke with US Secretary of State John Kerry. They discussed problems encountered in getting to a table of the Syrian government and opposition groups in the country. They agreed that countries in the Middle East in the process must be involved.

The Russian minister also spoke with his Iranian counterpart Mohammad Javad Zarif and Sameh Shoukry, the Egyptian Minister of Foreign Affairs. Lavrov spoke Friday at a meeting in Vienna also with his counterparts from Jordan and the European Union.