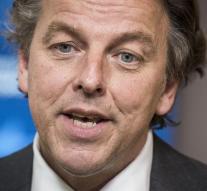 the hague - The Dutch diplomatic network is in 'worrying state' and needs to be 'urgently' strengthened. For this reason, the Advisory Council on International Affairs (AIV), an important advisory body of government, calls on Wednesday. There should be 70 to 80 million euros annually. Especially in and around the European Union, posts need more manpower.

According to the AIV, the work of embassies and consulates has widened much in recent years. In addition, the international situation has changed considerably by, among other things, migration and Russia. According to AIV, many posts are understaffed and the Ministry of Foreign Affairs has to rely on trainees frequently.

Minister Bert Koenders (Foreign Affairs) has already strengthened all the embassies and consulates around the EU. He acknowledges that more is needed. Because of migration, terrorism, crime and cyber threats, but also by the wishes of business, he is getting short of hands. In 1997 there were 1250 diplomats abroad as against 834 now.