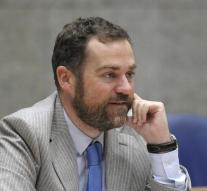 - TBS clinic Woenselse The Gate is not safe enough for staff and residents. According to the inspection are required immediate measures to improve the situation.

Responsible Secretary Klaas Dijkhoff (Security and Justice) wrote Friday to the House which it has been agreed that an external facilitator ' '' is appointed to implement changes.

Inspection Justice and Security said in September an investigation in response to media reports about abuses. It would include the question of drug use, bullying, a cover-up culture, lack of supervision of residents and relationships among residents and with staff.

The inspection found that there was intimidation and verbal and physical aggression by residents.