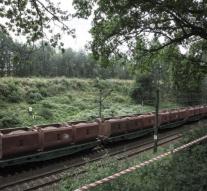 walbrzych - Near the Polish town of Walbrzych Tuesday start excavations to a gold train of the Nazis. The train would be loaded with Jewish treasures and lost 'amber room' from a Russian palace.

Two amateur historians think that the train is in a tunnel system that the Germans were digging at the end of World War II. They even have already filed a claim for 10 percent of the loot.

Experts in the field surveyed noted last year that probably 9 meter deep well is a tunnel, but the presence of a train during their soil investigation revealed nothing.

The amateur historians expect after only two days to report their initial findings.