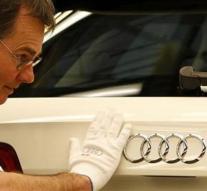 - The diesel scandal at Volkswagen has been recharged. VW daughter Audi has to recall 24,000 vehicles of type A7 and A8 from the German Ministry of Transport due to the manipulation of emission tests.

The relevant Audi models cast out about twice the permissible amount of nitric oxide when the steering wheel is rotated more than 15 degrees. During emission tests, the cars are on a roller bench and do not rotate the steering wheel. VW had so far maintained that the software in the relevant EA 189 diesel engine complies with European law.

The luxury cars were built between 2009 and 2013. Audi has until June 12 to come up with a solution and has already received an update of the software for the vehicles from July.