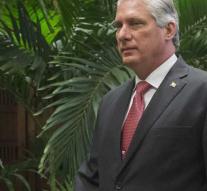 havana - Miguel Diaz-Canel was sworn in as President of Cuba on Thursday. He succeeds Raúl Castro, who retires after two terms of office.

The National Assembly of Cuba appointed Diaz-Canel on Wednesday as the successor of Castro. It is the first time since the beginning of the sixties of the last century that the country is no longer ruled by the Castro family.

No presidential elections are held in Cuba. The president is elected by the parliamentarians, all members of the Communist Party, from the National Assembly.