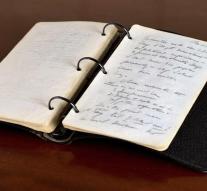 boston - A journal of American former president John F. Kennedy was sold for more than 700,000 dollars on Wednesday. That reports various media in the US. It is a journal that the young Kennedy supported when he worked as a journalist for a short period of time after the Second World War. He reflected, among other things, on Hitler and the weaknesses of the United Nations.

An auction house in Boston led out that the diary was sold for 718. 750 dollars, converted around 660. 000 euros. The diary was a popular item on the auction Wednesday where several Kennedy collectors opposed each other.

The diary consists of mainly typed text but also twelve handwritten pages. The texts were written in 1945 when the 28-year-old Kennedy was a correspondent for Hearst Newspapers and made a trip through the war-torn Europe.

John F. Kennedy became the 35th president of the United States in 1961. On November 22, 1963, the Democrat was shot while visiting Dallas.