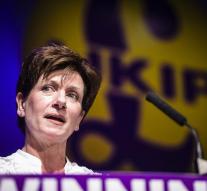 london - British politician Diane James stepped out of the UK Independence Party UKIP. She was some time even party leader, as successor to the eurosceptic Nigel Farage, but already gave up after eighteen days in the towel because they totally did not cooperate. The BBC James said Monday that her relationship with UKIP ' became increasingly difficult, '' reason to terminate the membership and go her own way.

Farage, who has returned the gavel to the new leader will be known later this month, said that Decision ' yet another act of irrational selfishness. ' He thinks now it is no longer suitable as a MEP. James, however, said she continues as an independent in Brussels and that will represent the interests of its constituency in the southeast of England ' dedicated and goal-oriented. '