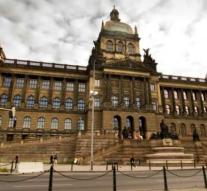 prague - The visitors of the National Czech Museum in Prague have presumably been gazing for years on fake gems. A diamond of 5 carat so far as the most precious piece in the collection. With an inventory it turned out to be a piece of glass. That has revealed the news portal Hlidaci pes (Watchdog) Tuesday.

Thieves probably stole the diamond decades ago and put a copy in its place. According to the site, seventy suspect specimens were discovered during the last internal audit of five hundred objects. This mainly involved stones that look like ruby, sapphire, topaz or alexandrite. A sapphire from Kashmir bought in 1978 turned out to be synthetic in this research.

'The collection is unquestionably out of order', known deputy director Michal Stehlik. He is currently working on the exhibition 'Treasury of the National Museum', with which the historic building on Wenceslas Square is reopened after seven years of restoration. Stehlik promised that only real pieces will be shown at the exhibition.