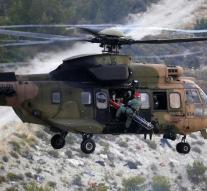 paris - France and Germany have decided to develop a new European fighter aircraft that can replace the existing fleet. The decision is part of and a series of new measures to work together in the field of defense and security, according to a document published on Thursday after a French-German ministerial council in Paris.

The two countries will plan a mid-2018 plan to develop the new aircraft. The two governments have also agreed to establish a basis for cooperation on the next model of the Eurocopter Tiger Attack Helicopter and in tactical air-ground missiles.

The new fighter plane project means that France enters a new road after returning from the Eurofighter project in the 1980s to get its own Rafale plane through Dassault Aviation.