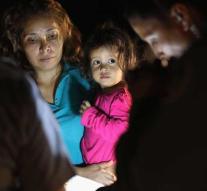 los angeles - Immigrant children receive a wide range of tranquillizers in American reception centers to treat their trauma structurally and with coercion. That they have incurred because they are secured and in some cases are separated from their parents.

Children who are being held in centers such as the Shiloh Treatment Center in Texas are almost certainly given medication, regardless of their condition and without parental consent. That is what the Center for Human Rights and Constitution from Los Angeles is putting in a lawsuit that has brought it up.

The lawsuit had already started on April 16, a few days after the Trump government had introduced the zero tolerance policy to separate children from parents who illegally passed the Mexican-American border. President Trump has reversed the policy Wednesday.