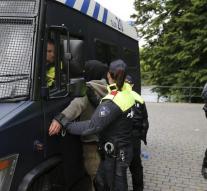 breda - In a demonstration of the anti-Islam movement Pegida in Breda Saturday detained several against demonstrators. The police said that the counter-demonstrators repeated requests to leave beside him laid.

Supporters of Pegida in Breda took to the streets to demonstrate against asylum in Brabant. Even opponents of Pegida have come to the city. Police are trying supporters and opponents of the anti-Islam movement to strictly separate.