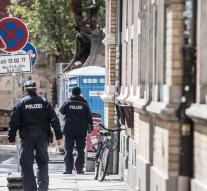 dresden - After two days and nights of trying, in Dresden it was possible to defuse a large bomb from the Second World War. The police have announced that there is no longer any danger that the projectile will explode. The eviction of the Löbtau district concerned has been lifted.

The first attempts to defuse the 250 kilograms of heavy projectiles failed. The bomb was found on Tuesday at construction works in Löbtau in the west of the city. Approximately 9,000 people had to leave their homes, but were able to return home on Thursday.