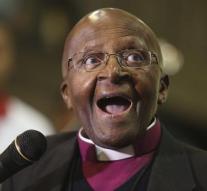 - Bishop Desmond Tutu, Nobel laureate and famous opponent of apartheid in South Africa, on Wednesday admitted to hospital for treatment of an infection.

The 84-year-old retired Anglican archbishop must remain in hospital in Cape Town two weeks, reported his daughter Thandeka Tut Gxashe. Tutu last year was for the same treatment in the hospital.

For what it is infection was not disclosed. In 1997 was diagnosed with prostate cancer Tutu. In 2010 he officially retired from public life back. In July this year, he was still seen in a video message at the International AIDS Conference. He looked haggard, but was intellectually sharp as ever.