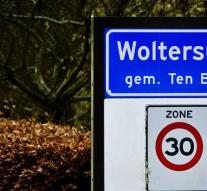 bussum - In his hometown of Bussum, the typographer Gerard Unger died on Friday. His brother-in-law reported this to the ANP. Unger is best known for its design of the blue ANWB signage signs along and above the roads. Also the signposts in the Amsterdam metro and the tourist signposts in Rome are out of his hand.

Unger followed his graphic education at the Gerrit Rietveld Academy in Amsterdam, where he was also a longtime teacher. From 2006 to 2012 he was Professor of Typographic Design at Leiden University.