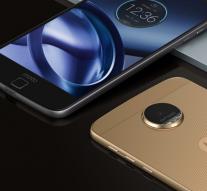 - Jim Wicks is leaving Motorola. The designer swapped the Lenovo-owned Motorola for Northwestern University. According 9to5Google is Wicks Motorola succeeded by Ruben Castano, the chief designer of parent company Lenovo.

Wicks was twelve years at Motorola, and he was responsible for the design of the once successful Moto Razr and later the Moto X. The Moto 360 smartwatch came from his hand. At Motorola, it seems that all veterans are slowly company to leave. Rick Osterloh recently stepped already. He joined Google to work.

The departure of Wicks should not come as a surprise. The recently launched Moto Z has little like a traditional Motorola smartphone, but just that, and a Lenovo device. The presumption, therefore, that Wicks had hardly anything to do with new Motorola phones.