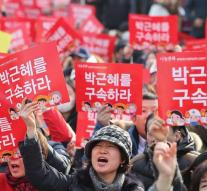 seoul - The three opposition parties in South Korea on Saturday (local time) filed a bill in parliament which should lead to the ousting of President Park Guen-hye. If the deposited Park embroiled in a corruption scandal, it is the first democratically elected leader of South Korea early to give up her job.

The bill, backed by 171 of the 300 members of the single chamber parliament storey, Park accused of violating the Constitution and abuse of power. The criticism Park is becoming louder since allegations surfaced that she would be put to pour money into political foundations under pressure with her girlfriend accused of abuse of power, Choi Soon-sil, conglomerations.

Over the past weekends, hundreds of thousands of South Koreans took to the streets to call resign on Park. Who denies guilt but has apologized and its fate in the hands of the parliament.

Later on Saturday, is scheduled a new demonstration. The vote on the bill probably on Friday.