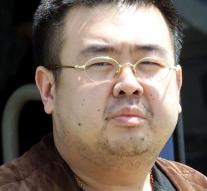 kuala lumpur - The two women suspected of killing the half-brother of North Korean leader Kim Jong-un, denied Monday they were guilty. The lawsuit in Malaysia against the 25-year-old Indonesian woman and 28-year-old Vietnamese woman began on Monday.

They would have killed Kim Jongnam at Kuala Lumpur Airport on February 13 this year. They blamed the highly toxic NXV VX on his face. The suspicion is that North Korea is behind the murder.

The two women can get the death penalty if they are convicted.