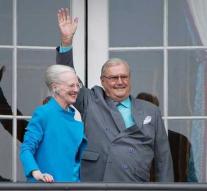 copenhagen - The Danish queen Margrethe has lost her support and stay of more than fifty years. In recent years she had to make it increasingly without a husband, Prince Henrik, who retired in 2016 and then increasingly struggled with his health. Last year Henrik was diagnosed with dementia.

The French diplomat Henri de Monpezat became acquainted with the Danish crown prince about the same time as the German diplomat Claus von Amsberg did with the Dutch heyday successor Beatrix. Superficially, there were also parallels in their life course. Henri grew up partly in the French colony of Vietnam, and Claus spent part of his childhood in German East Africa. Both had to win a country after the announcement of their engagement and acquire a difficult new language.

Margrethe and Henri, who had meanwhile been renamed Henrik, were married on 5 June 1967. Margrethe had two sons and became Queen in 1972. The Danish princes Frederik and Joachim did not always receive the love and attention they wanted. Moreover, the Danes retained a kind of hatred / love relationship with the idiosyncratic and artistic Frenchman.

Read more under the photo