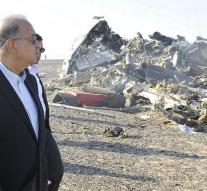 Danish tour operators have canceled their flights accordingly. Holidaymakers in Egypt as planned flown back home.

Last Saturday crashed in the Sinai a Russian Airbus down, possibly due to an attack. The flight had departed from Sharm al- Sheikh with more than two hundred people aboard. Nobody survived the crash.